Had this email today

I'm hoping you will be able to advise me on this. I'm looking at stocking your coir blocks in my shop in the future but there has been some recent discussion among snail keepers about batches from other brands potentially being salt contaminated due to proximity to the sea. I personally know that yours is safe, i've used it for years with my own snails and other inverts, but I wanted to do a double confirmation if possible so I can say to any customers with concerns that i've been assured it won't contain any. Unfortunately there has been in recent years some issues with some reptile specific coir, particularly with hermit crabs, that has made people who were around then wary.

Email ThisBlogThis!Share to TwitterShare to FacebookShare to Pinterest
Sometimes something nice happens, Thanks John.

After I had put in an order for Fertile Fibre materials last year, you asked me to comment on my experience with it over the growing season. As I would now like to put in another order, I thought it was about time I let you know how I got on.
First, the order arrived promptly, it was well-packaged and convenient, and I had no trouble handling it. Re-hydrating the coir blocks was easy – I crumbled a block into a wheelbarrow, added a bucket of water and left it covered overnight.
I could not have picked a worse year to try out new products or techniques in the garden. It was an absolutely rotten growing season. Parts of the local town, Hebden Bridge, were seriously flooded four times, and national news organisations seem to have set up permanent camp in Market Street to film the next episode of devastation. We are up on the hills above the town, but even so, the ground was sodden for the whole summer and still has not recovered. Worse, I suspect, from a growing point of view, were the constant poor levels of light, due to the almost permanent cloud cover. We got very poor germination of anything sown direct, and a small crop of small everything.
That said, my experience of using fertile fibre seed compost to sow and bring on seedlings inside for planting out was very positive. Only germination of onions and peas was poor, and I do not think that was the fault of the compost. I tried growing some perennial poppies as an experiment, and that has worked extremely well so far. My neighbour took half of them, and we have planted them out as bonny young plants, and we await results next year. If anything goes wrong now, it won’t be anything to do with the compost.
You suggested crumbling a block of coir and spreading it dry on a patch of my plot, as a means of lightening my heavy soil. I was sceptical, but I tried it, and that patch was very much easier to work than any other. I have ordered extra blocks this year. I’m afraid it did not improve the performance of the crops, but then, that might be asking too much in the growing season just past. We shall see again this year, provided we get a better season.
The reason I ordered Fertile Fibre composts was that in recent years I have had trouble with other commercial composts due, I think, to contamination with herbicide residues, coming from animal manure. This showed itself as a kind of mass damping-off, and seedlings which germinated but then refused to grow. I certainly had no trouble like that this year.
So, this year, we shall have perfect weather – a fine spring, and a summer with plenty of sunshine and rain every third night. Blight will somehow forget to visit the potatoes and the couch grass will contract some sort of dreadful disease which wipes it out. Then I’ll only have myself to blame for everything that goes wrong.

Available at www.fertilefibre.com/shop
Posted by Unknown at 05:40 No comments: 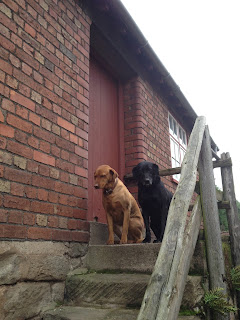 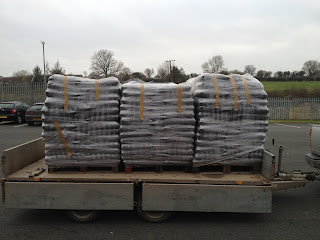 Might not look much but that's how we like it. 75% dry mix for a customer (6 years and counting). Dry Mix compost means that it is mixed dry, so when you add water it expands to the weight/volume you want, saves a fortune on shipping weight and volume, anything that needs a light weight in shipping. This customer also exports his end product all over the world with Fertile Fibre included.

28 bales of coir before and after 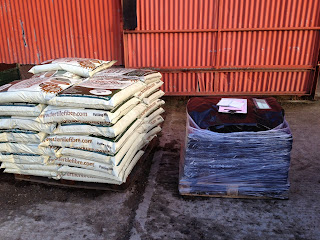 On the right is 28 Organic coir bales on a pallet ready for dispatch brought by a customer from ebay.
On the Left is the 30 bags of compost it will expand to. 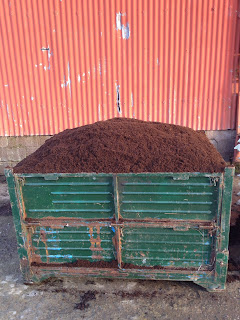 Or if you prefer your compost loose then this much.

Available from Fertilefibre.com, Ebay, thecoirstore.co.uk
Posted by Unknown at 00:52 No comments:

Biggest Order for Sterilized Loam received today. Should be ready for dispatch tomorrow. Sterilized Loam is flame treated to kill all the seeds and bugs in the loam(soil). Available From Fertile Fibre in 10kg or 20 kg bags delivered to your door. Ideal for mixing with compost or adding a base to window boxes or just filling in holes in your garden.
Find It here; http://www.fertilefibre.com/shop/index.php?cPath=43
Posted by Unknown at 03:34 No comments: